My name is Marcus Pehart and I live in Sweden. In the fall of 2017 I found a group on Facebook where people were throwing knives. Since I was throwing knives when I was a young teenager with a friend I got curious. We used to throw old military bayonets and had a lot of fun. I posted a video of me throwing military halfspin, the only style I knew back then. I was contacted by Danger a great thrower and someone I now see as a good friend. He showed me another group that was more active and I was overwelmed by the response. People were really friendly and helpful. I fell head over heels in love with throwing and the community!! I got help from tons of people and Paul ”Big Mac” Maccarone a higly merited thrower with world champion titles contacted me. He saw that I was from Arboga and he had been an exchange student in a town close to mine when he was young. I got to buy my first ”real” throwing knives from him.

At the end of 2017 I started Swedens first knifethrowing club together with my wife and two friends. After just two months two more friends joined and the foundations were set for Arboga sportsthrowing club. Within just a few weeks we were about 20 members throwing together.

In 2018 we had the opportunity to get an indoor range. The whole club worked together and made this possible. We built a wall where we could hang the targets and got three competition lanes and one lane for different games.

The club continued to grow in 2020 we had about 50 members. Despite of the corona pandemic we held the first Swedish championship in 2020 with 24 throwers.

More will come, the story about me is still being written.

5 % discount on all AceJet products with this code: LOVE 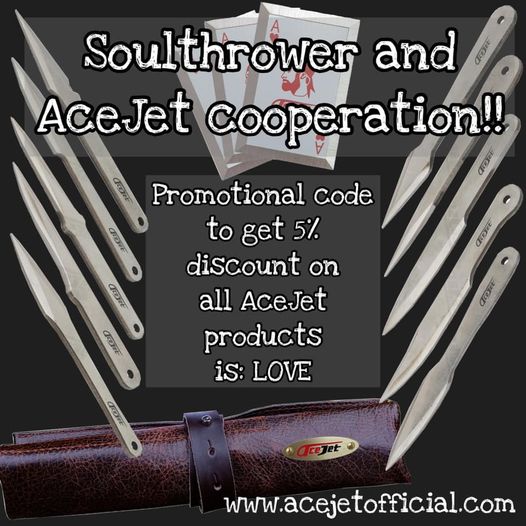